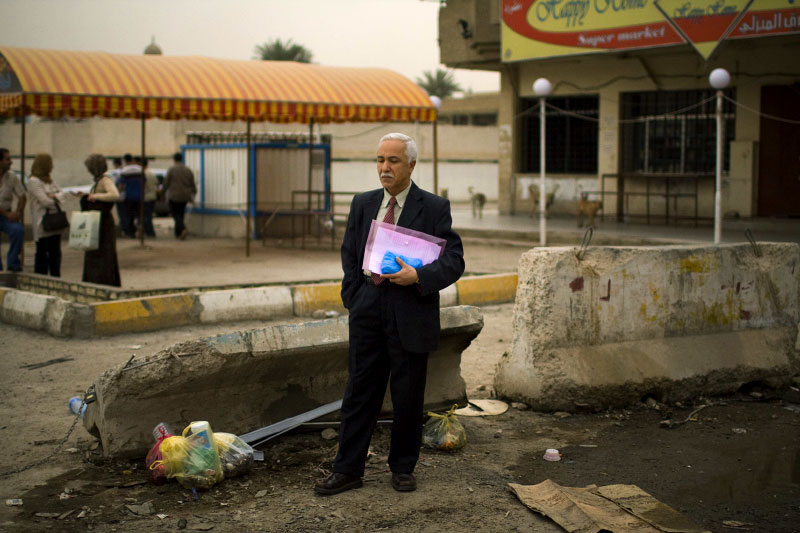 
Peering through a break in the barrier wall, Qasim Ali waits for his ride on al-Mawal Street near Baghdad's Sadr City district. A minibus, one of many stuck in traffic, will take him and other government workers to the Ministry of Trade, where he has worked for 30 years. This is his Monday morning commute.

The barriers, intended to protect people, have killed local businesses. Supermarkets are blocked from customers. The neighborhood is, for the most part, reachable only by foot.

Life readjusts. Ten-year-old boys sell jerrycans of gas from their perch atop the concrete structures. Brothers sell soda, candy and water outside the wall, in the traffic. Children wave goodbye to their parents and quickly disappear through the barrier gaps to school. To them, the wall is as normal as sidewalks and street signs.

In the past, a government car picked up Qasim at his home. Now he waits behind the blast wall, built by U.S. troops. The other commuters, also waiting for rides, don't socialize. Mistrustful, scared of kidnappings, they keep their destinations and sources of income secret. Many work for Western organizations.

Before 2003, civil servants like Qasim were not allowed to own personal vehicles. After the war began, he says, they were finally free to buy.

"Even though all the models are from the '90s, most were affordable. Necessary for doing errands," Qasim says. "Now there is traffic. Work is too far away for expensive gas. And [the wall] makes it difficult for cars to enter the neighborhood."

Qasim waits. It's been almost an hour now.

The street is a sight, the atmosphere heavy with trash odors and car exhaust. Street dogs own the sidewalks, school children jump puddles of sewage to cross the busy street, and a donkey bays at his driver's sharp whip.

But Qasim's eyes are closed.