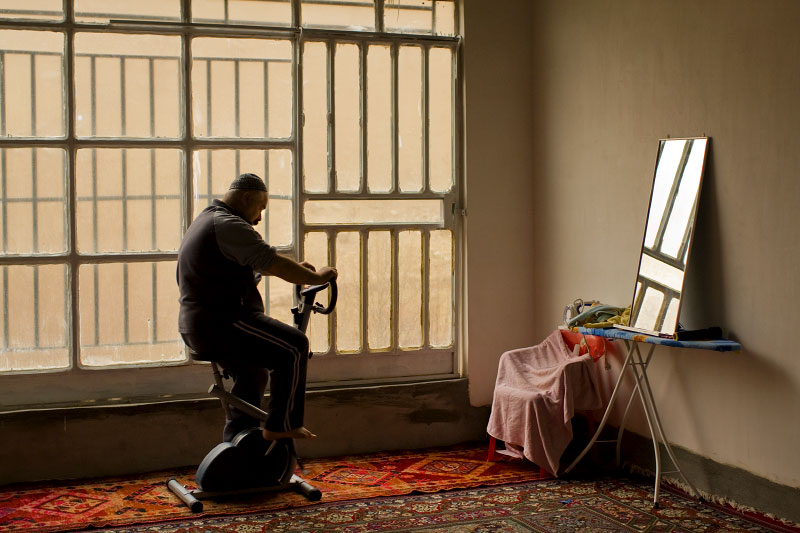 Small Comforts in Northern Iraq, May 2008


The main road leading to Man Kadir's house is a lazy stretch clogged by cows and goats, just inside rebel PKK territory in the Kurdish area of northern Iraq. The house is surrounded by fruit trees, crooked and brittle, slick from mountain rain.

From a fogged window in his house, he can see the orchard where it slopes down to the river.

Man Kadir starts the day by replacing his usual traditional Kurdish clothes -- pants that bloom from his scarflike belt -- with sweats. The rug-covered, cavernous room makes the exercise bike look small. His heavy cheeks and broomlike mustache overwhelm his mouth, hiding it completely.

His three daughters make tea, chop firewood and fold blankets. A blue light in the next room comes from their television. A Kurdish station shows footage from the last Turkish incursion, along with images of protests.

On the other end of the ornate rug, his wife starts lunch. Kneeling in front of a metal bowl, using the force of her whole body, she mashes cooked rice with her hands, making dough.

While the meat-filled dish is cooking, husband and wife don't speak. She watches him from the busy, wet kitchen. He has two families, two homes. She is the second wife.

He continues to pedal, looking straight ahead into a mirror propped on his wife's ironing board. He pedals and looks through the window at his land. Pedals and smells meat frying in the kitchen.

Years ago, in a village now deserted after threats of violence, they had more, he says. These comforts -- the bike, the orchard, his family -- can disappear quickly in wartime.