Unseen Iraq, a weekly column: A Dinner in Ramadi 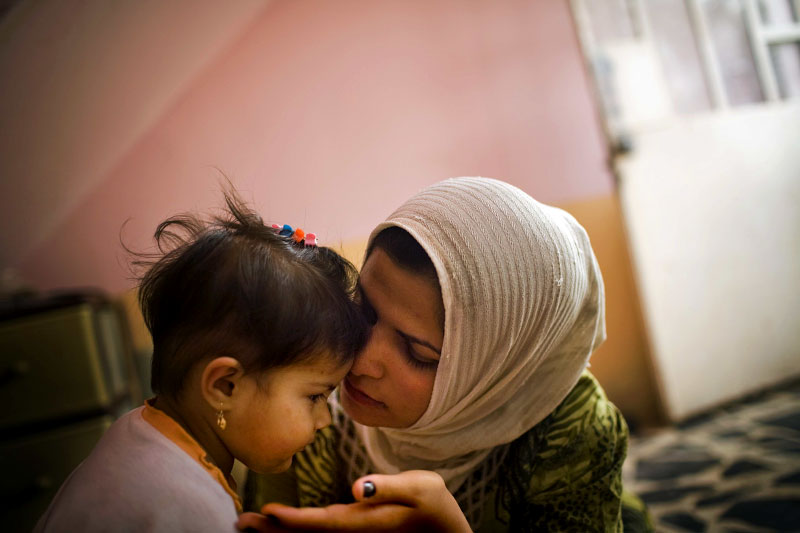 
Sheiks in traditional robes and kaffiyehs line the drawn-curtained room on regal chairs and floor cushions. Their deeply lined faces serious, they discuss problems that have come up in their regions of Ramadi, agreeng with slight, controlled nods as they massage prayer beads with flicks of their thumbs.

At the end of the long, narrow room, next to a fluorescent light tube on the wall, a door opens onto the kitchen.

There, women move, almost run, between a stove behind the house and the furniture-bare room, open to the summer light and heat. Towering reeds, swaying with the breeze, block the view of the Euphrates River.

Children are everywhere, crying, playing with cellphones, teasing, testing their strength, while their mothers sit around a large metal bowl on the floor, slicing okra, onions and potatoes.

Um Jasim, the family matriarch, sits against a wall on the only chair. Recently released from a hospital after suffering a minor stroke, she is the reason her children and cousins are here, giggling and reminiscing, oblivious to the politics in the next room. Henna dots their arms, remnants of last night's party.

Yesterday, Sousan Abdul Jabar, the youngest daughter, traveled with her 16-month-old daughter, Mariam, from Kirkuk, her husband's home, to her home town of Ramadi. It was her first time back in two years. She is pregnant again, another reason to celebrate.

"We used to have no need to worry," says Sousan about the time just after 2003 when it was safe to travel on the roads between Kirkuk and Ramadi. Then, she says, checkpoints became dangerous. "Then we could only call. Then we were scared of the street."

But the roads are safer now.

"I'm just happy because I'm between my family and relatives," Sousan says.

She comforts Mariam, encourages her to share, play games, chase. Her daughter is shy around her newfound cousins. The toddlers run, fall and laugh, slapping the floor with untrained feet.

Dinner will be a stew of vegetables and lamb with rice. Everyone helps. The mood is warm. Inviting. A family.